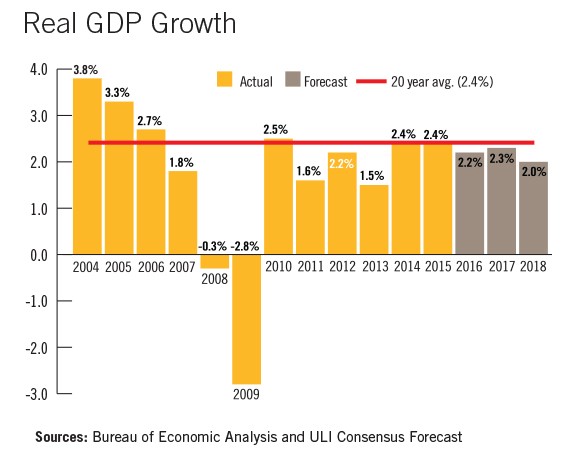 Are apartments racing toward a peak or will the boom continue?

Developers have been busy delivering new projects to satisfy growing renter demand. Yet given the volume of new projects still in the pipeline, some are beginning to wonder whether the market may be approaching a tipping point for oversupply.

Industry data continues to paint a picture of a robust market. Economic and job growth along with favorable demographic trends have created a near perfect storm for apartment investors with healthy absorption, occupancies, and rent growth. The wild card in the mix that owners, investors, and lenders are all keeping a close eye on is the fat development pipeline.

Statistics on the amount of new properties that have been completed and pending vary widely depending on the source. According to the Freddie Mac 2016 Multifamily Outlook, 2015 completions reached 306,000 units – the highest level in 26 years.

The 2016 Dodge Construction Outlook estimates an even higher volume, with 405,000 units that were completed last year and another 480,000 units that are expected to be added this year. Where data sources agree is that construction has taken a big leap forward with more deliveries ahead. The new development is providing more choices for both renters and investors who are still hungry to acquire properties.

At the same time, the industry is watching to see how the increased competition affects fundamentals within local markets and submarkets across the country.

“The development pipeline that we have here in Columbus [Ohio] is absolutely tremendous,” says Jerry Hall, CCIM, a senior vice president at Equity Investments in Hilliard, Ohio. Columbus is in the midst of its strongest apartment building boom in history, according to Hall. Currently, there are 91 communities and a total of about 13,900 units that are under construction, scheduled to break ground or are in the preliminary planning stage.

Columbus has been enjoying a low vacancy rate of about 4 percent. And despite the significant development activity, Hall anticipates that vacancies will remain low. The common view is that through 2017, and possibly into first quarter 2018, that there will be demand to absorb those new units, Hall says.

Certainly, millennials and empty nesters have been credited as a big driver behind the current renter demand. The growth in Columbus also can be attributed to its strong job and population growth. Job growth in the metro is among the highest in the Midwest at 1.9 percent, and unemployment is below the national average at 3.8 percent compared to the national 5 percent.

The story in Columbus is increasingly common in metros across the country. Multifamily development has been gaining momentum over the past few years, while vacancies remain below historical averages.

Initially, the hot spots for growth were focused squarely on major metros such as New York City, Los Angeles, and Washington, D.C. Those gateway markets remain very active. In fact, New York City and Los Angeles rank first and second when it comes to new multifamily permits issued during the first half of the year.

Including all privately owned housing projects with five or more units, New York City authorized a total of 12,833 units, and Los Angeles approved 11,316 new units, according to the U.S. Census Bureau.

Steady economic and job growth continue to spur renter demand and solid fundamentals for the multifamily market. The new supply is being absorbed in most markets nationwide, and overall, national occupancies remain at a healthy 4.5 percent. Effective rents are not rising as fast as in 2015 and 2014, but rent growth is still outpacing that of most other property types at 4.5 percent, according to Reis. 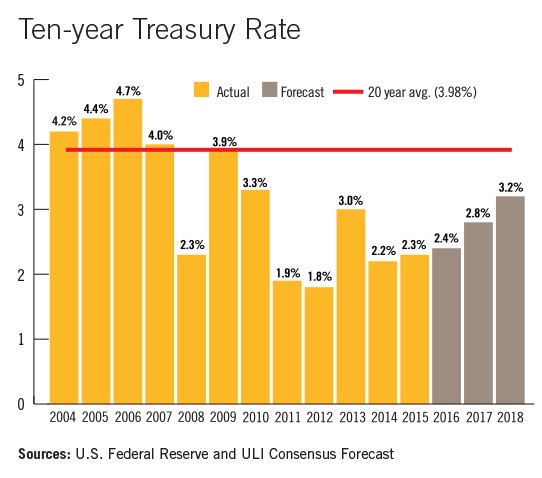 The common view is that the apartment market is on a path for sustainable, albeit slower growth ahead. Yet there are signs that development is getting ahead of demand in some markets.

According to Reis, pre-leasing has slowed considerably in the past year. Among the approximately 200,000 in apartment completions Reis tracked in 2015, roughly 40 percent opened their doors with vacancy rates at 30 percent or higher.

During the first half of 2016, 70 percent of the 100,000 units completed opened with vacancies at 30 percent or higher. In addition, more developers are offering concessions such as free rent to speed lease-up.

Seattle is another market that is experiencing explosive growth with an estimated 15,000 new apartment units expected to be completed this year – the majority of which will be located in downtown Seattle, according to Marcus & Millichap. Demand has been fueled by growth from local employers such as Microsoft and Amazon, and about one-third of the new apartments being built are luxury properties.

“In my opinion, the luxury market has reached its peak,” says Gary Hunter, CCIM, managing broker at Westlake Associates and a principal of Capital Financial in Seattle. “I think we are reaching a level now with the units that are coming online and the buildings that are going to be finished, that we are going to have oversupply by 2018.”

Seattle area landlords are already starting to compete for tenants with concessions and reduced rents. “Buyer demand is still high, though not as aggressive,” Hunter says. The driver of that at this time is the availability of low-cost capital and rents that have stabilized.

Atlanta’s urban corridor also is experiencing a building boom that has been fueled by rapidly rising rents. A few years ago, new properties were realizing rents of $1.50 per foot. More recently, projects have been able to capture rental rates of $2.50 to $2.75 per foot, which has encouraged more builders to jump into the market. Developers are finding that they can build a property, lease it up, turn around and sell it for a very attractive cap rate, and then move on to the next project, notes Moore.

However, there are some signs that per square foot rental rates are starting to slow in Atlanta along with some other markets, Moore notes. “They went up really fast, and I am starting to see them flatten out, because they just can’t push the ceiling anymore,” he says.

Atlanta is not experiencing oversupply yet, but the increased competition will create some pricing pressure and slow rental rate growth, Moore says. Those changing dynamics also are likely to encourage developers to shift their focus to suburban markets where there has been less construction and land prices are lower, he adds. 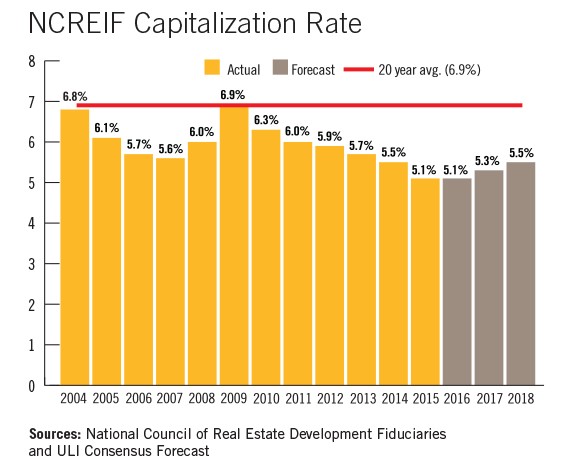 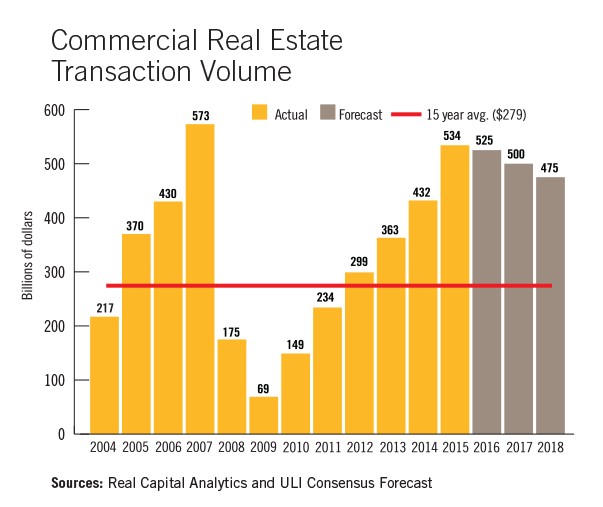 Despite the surge in construction activity, the apartment sector is continuing to perform very well with a positive outlook ahead for 2017 and 2018. The spring 2016 ULI Real Estate Consensus Forecast is predicting that vacancies will rise slightly to 4.9 percent by year-end, followed by modest increases in 2017 and 2018 to reach 5.2 percent and 5.4 percent respectively.

By historical standards, those higher vacancies are still very healthy. Apartment rental rate also is expected to moderate in 2016. After growing at rates of 5.3 percent and 4.3 percent respectively in 2015 and 2014, rent growth is expected to slow to 3.6 percent this year, followed by further declines to 3 percent in 2017 and 2.4 percent in 2018, according to the ULI Forecast.

Multifamily development has been on a higher trajectory compared to single-family residential, and there may be some overbuilding that occurs in select markets, according to Moore. But from a regional or national view, widespread overbuilding is not very likely, he adds.

The apartment market continues to be buoyed by powerful demographic and lifestyle trends. In addition, the more conservative financing climate that exists today will keep developers in check.

The main source of capital for construction loans, banks are tightening the purse strings. Banks are lowering their loan-to-cost amounts and are being more selective on construction loans they are willing to do, says Heather Olson, CCIM, a senior production analyst at Walker & Dunlop in Atlanta.

The larger banks are changing their capital requirements on construction loans due to new Basel III rules related to high volatility commercial real estate loans. Many banks are now requiring a dollar-per-dollar match on reserves.

“That is requiring borrowers to look in other directions to get that full capital stack back,” she says. Oftentimes, borrowers are filling that gap with securing preferred equity or mezzanine debt, which is more expensive than bank financing.

In some cases, borrowers are working harder to find the financing, while in other cases that more challenging lending climate may curtail some of the construction activity for projects, which have difficulty obtaining loans or borrowers that see the cost of capital increase.

“Before the Great Recession, financing was a lot easier to get,” Moore says. “Now, even though rates remain historically low, the ability to get financing lined up is not as easy. I believe the lending being tighter and having more restrictions is creating a counter sync to help provide balance and stabilize the market.”

The surge in construction activity is providing a welcome addition of for-sale properties in what remains a crowded and highly competitive investment sales market.

Apartment investors have kept their foot on the gas despite volatility in capital markets. After coming off a big year of activity in 2015, apartment sales volume rose another 10 percent year-over-year to total $72 billion during the first half of the year. Although price per unit declined slightly from a fourth quarter high of $147,281 to $144,114 in second quarter 2016, average cap rates dropped a further 40 basis points in the past year to average a near record low 5.6 percent.

That cap rate compression is further evidence of the voracious demand for apartment properties that still exists in the midst of a more supply-constrained market.

“We are seeing multiple offers and competition is fierce in the marketplace because there are no existing assets available for acquisition,” says Jerry Hall, CCIM, a senior vice president at Equity Investments in Hilliard, Ohio.

In particular, the new Class A properties being built are a prime target for institutions and foreign investors. Some investors are approaching developers as an equity partner in the development stage as a means to get a leg-up on the competition to acquire the stabilized asset when the developer is ready to sell. In other cases, investors will wait until a property achieves stabilized occupancy at about 80 percent before making a move.

“In today’s market, you can’t wait until it is 100 percent stabilized, or you will be a day late and a dollar short,” Hall says.

Increased interest from foreign buyers has added to the competitive landscape. Foreign capital that started out focused on buying apartment properties in major metros such as New York City, San Francisco, and Miami is now expanding out to other markets to diversify portfolios and find higher yields.

“We are seeing these large investors come in, especially with these large Class A developments that are going on,” says Heather Olson, CCIM, a senior production analyst at Walker & Dunlop in Atlanta.

Foreign investment has taken a bit of a pause during the first half due to factors such as uncertainty surrounding the Brexit vote and the declining value of the Canadian dollar. However, many anticipate that foreign buyers will step up buying activity in the second half of the year, which will likely keep pressure on pricing in many top metros. Foreign investors view U.S. investment as a stable investment, even at a yield of only 2 percent or 3 percent, according to Olson.