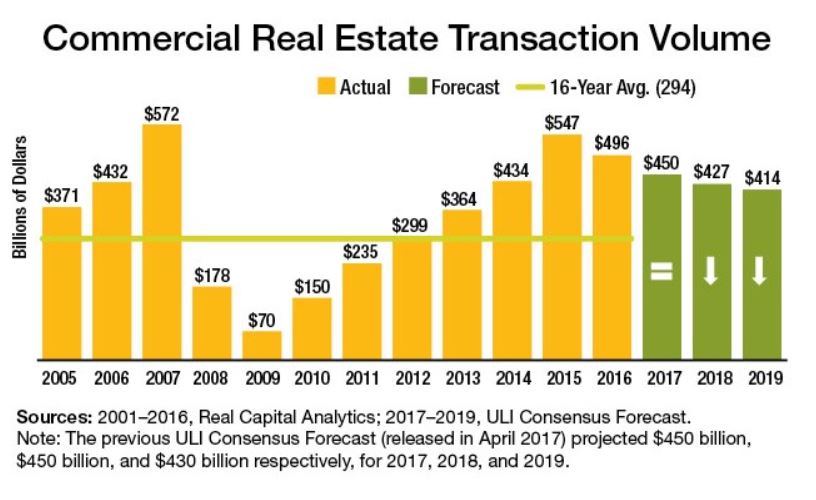 If there is one word that sums up the state of the U.S. economy these days, it’s resilient. The prolonged economic growth cycle hasn’t been terribly exciting or robust, and at times, progress has been downright choppy. But it has proven to have staying power, and economists are anticipating that the current economic cycle could turn out to be a record-breaker.

The economy has performed well during the past year. Issues with North Korea and rampant tweets from President Donald Trump, as well as no results on healthcare reform, immigration, or infrastructure spending, have not derailed it, notes K.C. Conway, CCIM Institute chief economist for 2018 and director of research and corporate engagement for the Alabama Center for Real Estate at Culver House College at the University of Alabama.

“The economy has been pretty resilient, and I think  the fundamentals are in place for the economy to stay resilient,” he says.

“Throughout this expansion, there have been several curveballs thrown at the U.S. economy,” agrees Kevin Thorpe, global chief economist at Cushman & Wakefield. Curveballs include Brexit; China’s economic slowdown; volatility in the stock market; highs and lows within market segments in tech and energy; as well as political uncertainty. Yet the economic expansion has weathered those ups and downs.

“There is a resiliency to this expansion in the U.S., that on the commercial real estate side, you have to feel pretty confident about,” he adds.

Barring any unforeseen disruption, January will mark the 102nd consecutive month of the economic recovery, making it the third longest since World War II. The recovery from 1991 to 2001 was the longest at 120 months and from 1961 to 1969 the second longest at 106 months. Leading indicators suggest that the current cycle could reach and, even exceed, those previous highs.

The natural tendency is to look at the long-running recovery cycle and assume that, after eight or nine years of growth, an end point in the cycle must be looming right around the corner.

“Expansions don’t die of natural causes,” says Christopher Thornberg, Ph.D., founding partner of Beacon Economics in Los Angeles. “They don’t just run out of steam because they are old.”

Generally, some shock occurs to the system that brings on a downturn. Despite the many conversations about this being late in the cycle, there is no reason to expect a recession anytime in the near future, Thornberg says. There are certainly issues in the economy, but there are no looming problems in the credit markets, no major oversupply, and no problems related to too much borrowing or too much spending, he says.

Across the board, economists are predicting that gross domestic product growth will continue at a rate of 2 to 2.5 percent for the next two years. “Although that growth rate does not sound exciting for many people, from a commercial real estate perspective, it is a good growth rate,” Thorpe says. In fact, a 2-percent GDP falls right in the sweet spot for commercial real estate, he says.

That modest growth is good enough to generate jobs and healthy demand for real estate across most sectors. But because it is not too good, it also keeps interest rates and inflation low, he says.

Everyone is asking whether the current prolonged cycle is winding down, or if there is still room for late-cycle momentum. The answer is not that simple, because different countercurrents run through the economy. The property markets and conditions also vary by city and by submarket, notes Hans G. Nordby, managing director of CoStar Portfolio Strategy in Boston.

The outlook for the broader U.S. economy is that it is in the eighth inning of a 13-inning overtime game. There continues to be many positive forces fueling economic expansion, including steady job growth, increasing household formations, strong consumer confidence, low interest rates, low fuel prices, and a recent surge in values in the stock market during the past year.

“Suffice it to say that most of the near-term leading indicators are flashing pretty bright green,” Nordby says. “We don’t have a reason to expect a recession in the U.S., barring an ignominious shock, for the next 12 months.”

Certainly any number of potential risks or shocks could pop up to slow or stall economic growth, including  geopolitical risk, inflation, rising interest rates, and a labor shortage.

“The primary risks our economy faces right now are political risks,” Thornberg says. Much of that concern is focused squarely on President Trump.

Twitter wars aside, some economists are concerned about how President Trump and his administration will move forward on foreign policy and trade agreements. Will President Trump and the U.S. Congress will be able to deliver on campaign promises related to healthcare and fiscal stimulus? Since Congress recently passed tax reform, it is not clear how markets will react to that and how it could shake confidence in the economy.

The tight labor market, with U.S. unemployment hovering at 4.2 percent, also is viewed as a potential risk to economic growth. “We’re running out of people who are worth hiring, and we don’t let educated immigrants stay once they have graduated,” Nordby says. “There are real labor force constraints.”

Legal immigrants to the U.S. typically are those with the highest skill levels who can pay the most taxes and grow the economy. It is becoming harder for those people to enter and stay in this country, he adds.

Some economists point to factors that counteract the labor shortage. Increased automation is eliminating some lower-level jobs. In addition, trade groups and community colleges are working to improve training and marketing of alternative jobs and careers in fields such as advanced manufacturing or 3D printing.

The total U.S. unemployment rate, including recent college graduates, underemployed workers, or those that have been unemployed for more than a year, is about 8 percent. “That tells us that we do have the capacity in the workforce, but our gap is how we get them the skillset that they need to participate,” Conway says. 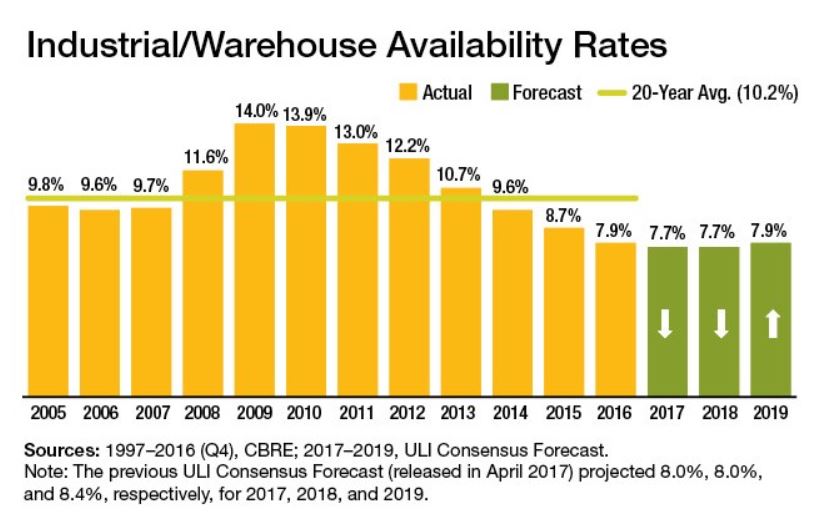 Overall, most agree that the commercial real estate market is in a mature stage of the cycle, with decelerating growth, higher property values, and lower returns. Those market conditions make investing more difficult, as investors look to achieve higher returns, while still being mindful of mounting risks.

“It’s not like it was a few years ago when you could pretty much buy anything in a healthy city, and it was likely to perform reasonably well,” Thorpe says. “At this stage of the cycle, real estate is intensely local. Within certain cities, some submarkets will thrive, and others will struggle.”

Each of the four core property sectors – multifamily, office, industrial, and retail – are at different stages of the cycle and face different headwinds and tailwinds.

Industrial continues to be the darling of the industry, with plenty of room to run. Although rent growth is slowing, the sector is still experiencing high absorption levels. Vacancies are expected to maintain below-average levels between 7.7 and 7.9 percent for the next two years, according to the ULI Fall 2017 Real Estate Economic Forecast.

E-commerce has been a big engine for industrial growth. “Our industry seems only to talk about e-commerce, but ultimately it is linked to the consumer,” Thorpe says.

The demand is increasing for a multitude of products from clothing and groceries to electronics and building materials. E-commerce only accounts for about 20 to 25 percent of all leasing.

The rest of it is all linked directly to the consumer for manufacturing, shipping, and storage of goods. “There are many engines driving the industrial boom, and not just one,” Thorpe says.

Office fundamentals are expected to remain relatively stable. The ULI Forecast calls for vacancies to tick up slightly higher from 13 percent at the end of 2017 to 13.4 percent by the end of 2019, while rents will continue to grow at a rate of about 2 percent per year for the next two years.

The key message in office is “go new or go home,” Thorpe notes. Since 2012, more than 70 percent of the office space absorption has been concentrated in new, high-quality Class A space.

That is clearly what tenants prefer. In addition, central business districts will continue to outperform, as it is where most people, including millennials, want to work. Millennials gradually will shift to the suburbs, but that transition is still five or six years off, he adds.

Multifamily is under more scrutiny, as vacancies have started to tick higher, and a big load of new projects has been completed in 2017 or underway for 2018. Reis’s 2017 Q3 data showed that vacancies increased in 50 of 79 markets.

“More than half of markets have excess supply that is affecting vacancy rates and slowing down rent growth,” says Barbara Denham, senior economist at Reis in the New York City metro area.

Those apartment markets that are hurting include smaller cities, such as Oklahoma City; Little Rock, Ark.; and Tulsa, Okla., as well as major metros. New York City has struggled more recently due to overbuilding and flat rent growth, while San Francisco and Boston also are flat.

“Markets that have been overbuilding have suffered a bit because of retrenchment and some slight declines,” Denham says. Overall, relatively healthy occupancy exists in apartment markets, she adds.

The ULI Forecast predicts that vacancies will climb from 4.8 percent in 2017 to 5.1 percent by the end of 2019. However, those levels are still below the 20-year average of 5.4 percent.

Within multifamily, some submarkets nationwide have loads of new supply, and other submarkets have very limited new supply. Atlanta’s Midtown market, for example, has 26 percent of its total Class A inventory currently under construction.

“There are big differences between cities, submarkets, and class types,” Nordby says. In addition, emphasis has been more concentrated in high-end, Class A projects.

On the retail front, store closures and retailer bankruptcies are battering brick-and-mortar retail. According to a retail report from Cushman & Wakefield, an estimated 10,000 stores were expected to close in 2017, which was more than double the nearly 4,000 stores that were shuttered in 2016.

Malls are taking the brunt of the retailer shake-out, and more closings are certain for 2018. The vacancy rate for malls increased 20 basis points to 8.3 percent in third quarter 2017, according to Reis.

Most of J.C. Penney’s and Macy’s announced store closings have occurred already, while Sears recently announced 63 more stores to close in late January. However, those closures are not having a big impact on nationwide vacancy numbers.

The closure of a huge anchor store reduces foot traffic and creates more dark space in a mall, Denham notes. The whole reorganization of the mall industry will continue to be a big issue in 2018, she adds.

The 2017 holiday shopping season will likely result in more fallout. “Retailers are not going to throw in the towel until after the holiday sales are done,” Nordby says.

That news is going to hit in January 2018, and that will likely create more excess space. “In January, we’re going to be talking about more store closures, and there is going to be a lot,” he says.

Retail is clearly a sector in transition. However, the retail climate is not as bleak as some of the news stories suggest.

“The good news is that developers are not building retail like they had been prior to the Great Recession, and we’re still seeing a decent amount of net absorption in some markets,” Denham says.

Although some soft spots exist in specific markets and submarkets, the overall outlook for the economy and commercial real estate remains positive for 2018 and likely into 2019.

“The pattern of 2-percent growth has been so consistent throughout this expansion, and it has created anxiety in some people who think we should be growing at a faster rate,” Denham says. “It is my view that this slow, steady expansion should continue at the same pace, just for the reasons that it has stayed at this pace – that it is a healthy, sustainable rate of growth.”